I may have told you how I owned and operated a Weight-Management office in Newport Beach, California during the late 80’s and early 90’s.

I received several emails asking if I would share some of the challenges and obstacles we faced and how we overcame them.

So, I dug through some old files to see what might be relevant in today’s market. Just about everything!

But here’s one issue that really sticks out!

That’s What We Call ‘Em

During our “CONVERSATION” with prospective new clients, we often discovered that the prime motivation for losing weight was an upcoming event. I’ll bet you experience the same thing.

It became so prevalent that we came up with a name for these new prospects: “One-Event Wonders.”

It could be a:

So, we learned to weave these topics into our initial interviews because it wasn’t something we felt we could come right out and ask without making the prospect feel uncomfortable.

How We Qualified the Client

All prospective clients were required to fill out a contact form — which included their date of birth. We checked that out right away.  If their birthday was within 8-10 weeks, we considered it a “red flag.”

During the “CONVERSATION” we would attempt to find out what year they graduated from high school. We’d do the math and if we saw it was coming up on their 10-year or above reunion… then, that was a “red flag.”

“Where are you spending the holiday”
(Thanksgiving, Christmas, Summer Vacation, etc.) If it was with the extended family or in-laws… “red flag.”

You get the idea. We were simply trying to qualify the client’s primary motivation in a round-about way. You’d be surprised how much information they provide when it’s in the course of casual conversation instead of “point blank” questions.

They see weight-management as just that… an EVENT.

In their minds, it’s a journey from Point A to Point B.

And, once they reach Point B, they actually believe they can return to all their old bad habits. That’s right, they see a “Finish Line!” And, oh boy, what they won’t do to get there..!

It’s a shame that they’ve been conditioned to think this way. It’s the root of all Yo-Yo dieting.

The commercial weight-loss industry has, for more than 50 years, taught people how to starve themselves.

How to feel absolutely miserable. Tired. Hungry. Head-pounding horrible… all in the name of reaching the “magic number” on the scale or fitting into their skinny jeans!

We often joke that commercial weight-loss centers are like the “Invasion of the Body Snatchers” for the horrible stuff they do to peoples’ bodies.

And yet, people are willing to go along and actually pay money for this ridiculous protocol. Mesmerized…! 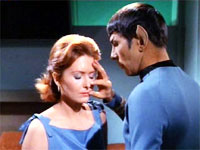 More than once I wished I had Spock’s power to remedy their warped mindset and with a few well-placed fingers on their heads… get them to “see the light!”

But that’s not how it works. Especially if their 20th Reunion is just eight weeks away!

But, this is where the rubber meets the road. This is the very time you need to initiate the conversation about credible weight-management being a “process.”

That it is about developing positive lifestyle habits (that do NOT include starving). That ultimately, credible weight-management is just a bit of re-programming to live a healthier life.

Quite often, people think you’re nuts when you tell them that during their weight-management program, they should never EVER be hungry.

That they should feel energized throughout the day. That they will sleep like a “baby” at night and that people will start to notice their eyes, hair, skin and nails all seem to have certain healthy “glow.”

But It’s NOT All Glitter and Glitz

Even after you’ve promised them these incredible nuggets of truth, the One-Event Wonder, still has an agenda. And, a timeline.

They do not want to hear that this is going to take any longer than the time frame they have in front of them before the event.

If that became the overriding factor with our prospects, we would very politely (burn no bridges) and with great compassion, decline to take their money. Instead, we would invite them back AFTER the event.

With One-Event Wonders, we made sure we knew the approximate date of the EVENT, and would follow-up with them soon thereafter.

Because at this point they are probably feeling miserable and may have already eaten the furniture!

But they remember our conversation about all the positive things they should be feeling. And with no event on the horizon, they were often ready for a real lifestyle change.